2013 will indubitably hold some surprises that even the cleverest forecasters and futurists won't be able to predict, but there a few trends I've noticed that may continue on to make this new year an eventful one.

This year, I suspect that in America there will be more people talking about our information infrastructure, or more simply, how easy it is to get on the Internet and how fast it goes. The telecommunication industry and engineers have already been talking about how more average people are eating up more bandwidth every day (especially with the rise of streaming media services such as Amazon Instant Video, Youtube, Hulu, and Netflix), but this year there will be lots of everyday folks realizing that they want a faster Internet. While I can't say for sure if serious efforts will be made to actually provide more bandwidth  through more or smarter infrastructure, as laying down fiber optic cable or setting up cell phone towers won't be cheap, this year is probably going to be the one where people start feeling the strain of a slow Internet and begin demanding for more options. 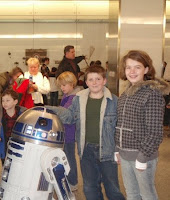 Then there are going to be some interesting projects in robotics this year, but the one most noticeable will probably be in local grocery stores. Those self check out counters will become a lot more ubiquitous before the end of this year, which will be increasingly efficient, but bring rise to annoying jokes of "Robots are stealing their jobs! Deport all robots!" Nobody will find those jokes funny, even if there's going to be someone saying it all the time.

Then, the summer of 2013 might have the fewer people hitting the beach than ever. NASA will be forecasting solar flares that may interrupt many of our electronic devices, while the news will probably focus, as it always does, on the scary things these solar flares could do to your health. These solar flares could cause some serious problems but as we look into it, the people who aren't scared into a tizzy by what they see on TV will be the ones who will take the appropriate precautions and make sure that 2013 is just another year.